Bumble Bees are large social bees 1/2 to 1 inch long, with black and yellow or, rarely, black and orange body markings. Their nests are underground and they spend most of their time traveling between the nest and the flowers from which they obtain food.

People who complain about bumblebees flying about under the eaves of their homes are probably being annoyed by Carpenter Bees. Carpenter Bees resemble Bumble Bees in both size and appearance, but are not social insects. They construct their nests in trees or in frame buildings. Most of the top of the abdomen of Carpenter Bees is without hairs and is shiny black in color. By contrast, the abdomen of Bumble Bees is fully clothed with hairs, many of them yellow in color. If you see a number of large bees hovering near the eaves of the house or drilling in wood, you have Carpenter Bees. There is only one species of the large Carpenter Bees, Xylocopa Virginica, which is encountered in Pennsylvania.

The male bee is unable to sting. It is the male Carpenter Bee, which is most often noticed. They hover in the vicinity of the nest and will dart after any other flying insect that ventures into their territory. A common behavior of the males is to approach people if they move quickly or wave a hand in the air. The males may even hover a short distance from people causing unnecessary panic. The female however, is capable of stinging but seldom does. She must be extremely provoked (i.e. handled) before she will sting. 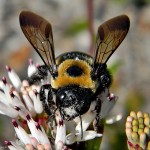 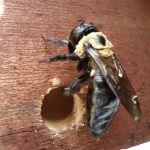 Yellow Jacket is a general term used to describe many species of wasps.  They are social hunters that live in colonies.  Although beneficial for pollination, they can become a safety concern if the colony develops too close to homes.  Colonies can be underground, inside walls, or hanging paper nests. 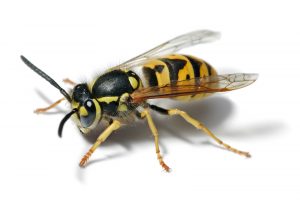 Bald-Faced Hornets are actually a yellow jacket wasp not a true hornet. They tend to build hanging paper nests that can develop quickly into basketball size or larger.  They will aggressively defend their nests with painful repeated stings.