The Pavement Ant is an introduced species and is one of the most commonly encountered house-infesting ants in Pennsylvania. The ants were likely carried to the United States in the holds of merchant vessels during the 1700s to 1800s. These ships were filled with soil from Europe to provide ballast on the trip to the States. Once in port, the soil was removed, and goods were loaded on the ships to carry back across the Atlantic.

The Pavement Ant is a soil-nesting species that currently has a distribution from New England to the Midwest, and south through the Mid-Atlantic States to Tennessee. It is also found in parts of California and Washington.

The Pavement Ant workers are about 2.5-4 mm long and vary in color from dark brown to black.  Small mounds of sand or soil between pavers or cracks in concrete indicate colonies below the surface. 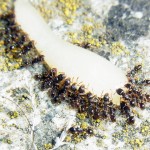 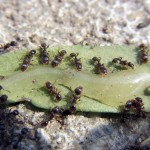 Carpenter Ants are large black ants.  Minor workers are around 3/8 inch long and major workers are about 3/4 inch long.  The colony is typically located in wood however they do not eat wood like a termite, they excavate the wood to make room for the colony.  Mature Carpenter Ant colonies expand outward, producing what are called satellite colonies. Homes are constantly at risk for start up colonies to develop.