Cockroaches are among the most common of insects. Fossil evidence indicates that roaches have been on earth for over 300 million years. They are considered one of the most successful groups of animals. Because Cockroaches are so adaptable, they have successfully adjusted to living with humans. About 3,500 species of Cockroaches exist worldwide, with 55 species found in the United States. Only four species are common pests in Pennsylvania structures. These are the German, Brown-Banded, Oriental, and American Cockroaches. A fifth species, the Pennsylvania Wood Cockroach is an occasional nuisance pest in some locations.

The German Cockroach is about a half inch in length. It’s color varies from tan to almost black and it has two dark parallel streaks on running from behind the head to the base of the wings.  The German roach is the most common species.

The Brown-Banded Cockroach is also a small species measuring about  5/8 inch long.  It is tan to light brown and has two light-colored bands across the wings and abdomen.

The Oriental Cockroach, also known as a waterbug, is a large species of roach, reaching lengths of 1 to 1-1/4 inches.  It is dark brown to black in color and has a glossy oval body.

The American Cockroach is the largest of the species common to Pennsylvania, approximately 1-1/2 inches long. and reddish brown.  It can be identified by its large size and reddish brown color with faded yellow edges on the thorax. 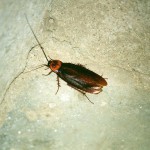