Spiders, along with Daddy Longlegs, ticks, mites, and scorpions, belong to the class Arachnida. They are beneficial animals that feed on all sorts of arthropods, including insects. About 3,000 species of spiders are found in the United States. Spiders rarely bite people, and most species found in the world are harmless. However, some people may be allergic to a spider’s bite, and a few species of spiders are known to produce bites that may have serious medical implications for humans. Two of the more medically important types are the Black Widow Spiders, and the Brown Recluse Spider and its relatives. These two types of spiders are rarely encountered in Pennsylvania. Although Black Widows can be found native in Pennsylvania, the Brown Recluse spiders are normally introduced and cannot survive in Pennsylvania’s climate unless they remain inside heated structures. Many spiders indigenous to Pennsylvania will come into homes, mostly during the autumn.

Avoid bites by wearing gloves when doing yard work. Be careful when reaching under stones, logs, or firewood, or when reaching behind undisturbed household items such as cabinets, furniture, and boxes. Black Widows, Brown Recluses, and other spiders tend to inhabit such undisturbed areas.

Reduce the amount of potential nesting sites around the home. These include woodpiles, lumber stacks, rock piles, brush, high weeds and grasses, and discarded man-made items. Frequently cleaning and moving stored items in basements, storage areas, and garages will reduce the number of spiders by disturbing their habitats. Vacuum spiders and their webs from behind objects, under tables, and in wall and ceiling corners. Close openings in exterior walls and install weather stripping and thresholds at the bottom of doors. Leave firewood outside until you are ready to place it in a stove or fireplace. Firewood that is stored inside, even for short periods of time, will begin to warm, and any overwintering spiders hiding there will become active and may crawl out from under bark and crevices in the wood.

Some spiders will collect in large numbers on buildings with bright exterior lighting. The lights attract a variety of flying insects on which the spiders feed. Spider populations can be reduced by spraying a high-pressure water stream onto the building, and by switching from mercury vapor to sodium vapor exterior lighting.

Unfortunately, most insecticide sprays, whether they are applied to the interior or exterior of a building, do little to control or prevent spiders from entering. If spiders are sprayed with an insecticide, they will eventually die, however no product prevents them from entering. If you have a confirmed infestation of either Black Widow or Brown Recluse spiders in your home, contact Penn Pest, the Penn State Department of Entomology, or the Penn State Cooperative Extension office in your county for additional information. 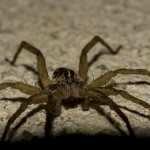 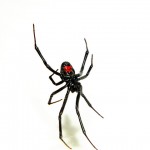 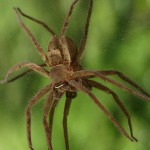